Well, this is a much anticipated post for many of you out there.  Marius and I are pleased to announce the (hastily expedited) birth of Emilie Grace and Mathilde Claire Ernst…

You’ve heard my vomiting stories from the earlier part of the pregnancy – I don’t think I need to revisit that part at all.  So let me begin at 20 weeks pregnant with a short recap of events.

Week 10 – Twins.  Complication
Week 13 – Anterior (front implanted) low lying placenta. Complication
Week 20 – Incompetant and shortened Cervix.  Complication, used to be fixed by the good ol’ stitch  … however, here we had a new technique performed where I had a silicone based diaphragm inserted to support the whole general area.  Think a bath plug used as internal scaffolding.  Requires constant monitoring as well.

Which brings me to week 24.

As you all know, the twins are monochironic/diamniotic twins.  This means that they are identical twins, sharing one placenta, but within their amniotic sac they had a very fine membrane dividing them into 2 seperate sacs.  They are still most certainly identical because of this – this only means that when their egg split, it split in the first 4-8 days of fertilisation.

Monochioronic twins are monitored closely as they tend to have more problems with placenta sharing, growth,  blood vessels etc.  At 24 weeks we went in for a routine check up – and on the ultrasound it was discovered there was a massive discrepancy with amniotic fluid.  Baby A (Emilie) had so little fluid she was ‘stuck’ to the wall of my uterus, and Baby B (Mathilde) had too much fluid, that was pushing Emilie down even further.  We were rushed to Leiden hospital immediately from Almere, to a specialist team of doctors for a second opinion.  This is where we were given the heartbreaking diagnosis that our girls had chronic Twin to Twin Transfusion Syndrome stage 1.

TTTS is a syndrome that is unpredictable,  it can lay dormant or at the same level for weeks on end, before rapidly deteriorating.  We had been given a diagnosis that gave our little ones a death sentence.  At 24 weeks, we were heartbroken to have come this far and be told that things were going to get worse.  And yes, we also were given the choice to terminate the pregnancy. (Not even considered)

A little about TTTS – http://en.wikipedia.org/wiki/Twin-to-twin_transfusion_syndrome.  It happens in only 10% of multiple pregnancies and is ‘Just one of those things … ‘.  There is an option of surgery, where the placenta is divided by laser surgery to sever shared blood vessels, and we were offered this, but at the stage we were at we decided this was not an option UNLESS the condition deteriorated rapidly.  Thankfully, our little troopers stayed stable and our situation did not deteriorate.  The fluid imbalances stabilised and thankfully became smaller.

It did mean that we were suddenly whisked away from our local hospital to the LUMC – Leiden University Medical Centre. The team here are lovely and supportive – and although we had a few bad experiences with a couple of staff, really, the level of care and attention we all received was amazing.  Whilst they were confirming the diagnosis of TTTS, they also discovered that our girls had a double whammy – they were also suffering from another condition known as Twin Anaemia Polycythemia Sequence – meaning that Mathilde had too much blood, and Emilie had not enough.  It also meant that Emilie came out rather small and dainty looking and very pale, and poor Mathilde came out looking like a great big red puffy tomato.  (I will post a picture later in this post.).  More information on TAPS can be found here – http://en.wikipedia.org/wiki/Twin_Anemia-Polycythemia_Sequence_(TAPS)

With a double whammy (well, triple, Stuck Twin Syndrome is nothing to be sneezed at!), things were not looking so great for our girls.  For 7 weeks we travelled between Almere and Leiden, really not sure of what the outcome of each visit would be.  Our girls battled on, literally defying medical odds (I spent a few appointments with my doctors throwing their hands in the air and going …. Jaaaaaaa – I can’t understand this!).

However, Tuesday the team made the discovery that Emilie’s anaemia had worsened, and it was best to prepare them for delivery.  I was immediately admitted to hospital, and given heavy courses of steroids to help prepare their lungs for birth.  I was constantly monitored, the babies were constantly monitored and on Thursday morning 11am, a medical team descended on my room where I was taken to surgery for an emergency caesarean section.

Twin 2 –
Mathilde Claire Ernst
Born 12/12/13 at 12.33pm
1590 grams (3 pounds 7 ounces)
Assisted breathing, controlled haemoglobin releases and monitoring.  Screams like a trooper!
*Mathilde means strength in battle – and is pronounced the Dutch way – Matilda (and no, I did not pick it! Marius did!) She’ll be known as Tilly (or Zoidberg)

Our girls are healthy, and fighting an incredible battle against many odds.  For now, think of them in your prayers and thoughts and send them a little love :). 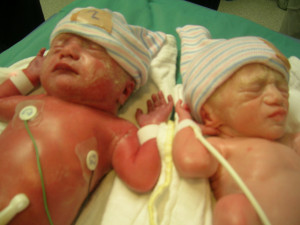 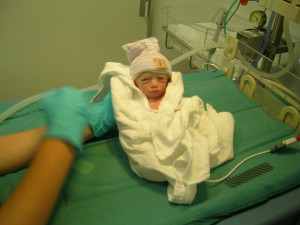 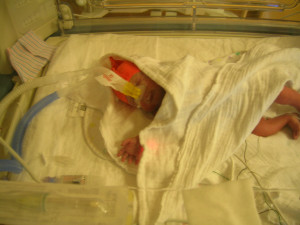 14 thoughts on “The trouble with twins …”