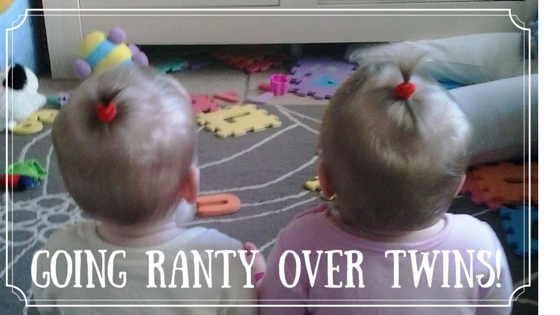 Everyone’s now seen that amazing post by Uncanny Annie – if you missed it – here’s the picture on Instagram.

My opinion? Thanks Annie for doing something that I have only ever dreamed of doing – and congrats on going viral! You madam, are awesome.   As an Aussie mum of twins in the Netherlands – I salute you!

I have seen a lot of haters come out though – and it’s really not necessary!

1.  People. It was a joke. She didn’t wheel them around in public with the sign on.  It was a humorous thing that she did for shits and giggles.

2. I saw this statement – “Twins don’t get any more reactions than singletons.”  Obviously said by someone who hasn’t had twins.  Try doing a dash to the supermarket with newborn twins (bread and milk – 5 mins in and out, right?).  I’ve had days where this has taken an hour.  Tried walking down the street when people throw themselves in front of the pram to look at them?  Now imagine that repeated.  Twins are a novelty (as are multiples in general) – yes, single babies are also a novelty – but 2 or more in a pram? It’s open season.

3. Noone asks a parent of a single about the conception of their child.  Not unless they’ve been public about their fertility.  I’ve had people pretty much tell me I am a liar about the fact that my kids are naturally conceived. (Yes, they are.  Unless you count a bottle of wine and Eurovision as fertility treatments).  Same goes for the birth.  I usually reply in detail about the emergency C-section I had and how I was floating high on drugs …

4.  Seriously, the questions don’t end.  And I totally understand where Annie was coming from.  You get asked the same questions from different people.  I get asked why, if mine are identical, don’t they look EXACTLY alike.  And if I’m sure they’re identical.  (yes, they are. I have a picture of the placenta and an entire research department at a major hospital here who can back me up – bring it on, doubters.)  Is it a boy and a girl? (My husband’s priceless answer is ‘Not yet.’)

I guess where I’m going with this is to first of all, encourage people to take it in the spirit it was intended.  A bit of harmless fun posted by a mum who has just heard the same questions over and over again.  I fully appreciate where she was when she wrote these signs!

Secondly, maybe consider when you’re talking to a parent of multiples – especially newborns – that sometimes they are tired, that they are learning a huge life lesson, and that they are asked a lot of questions.  They might have had a traumatic birth experience only too recently, and talking about these things might open some raw wounds.  I remember getting asked about the delivery of my girls about a month after they came home from spending 7 weeks in NICU – and then being told I should have had them naturally because that would have been better for them.

Think about your question – do you like being asked by random strangers about your sex life? Yes, jokes about ‘double the fun, double the trouble’ are funny … the first 50 times.  If you’re going to comment about how busy things are for me, and how you are glad you don’t have twins … please, feel free to also volunteer some time to help me out.  Please think about your questions. I don’t mind answering them, but really, as a twin mum, I’m begging you.  If you wouldn’t ask any other random stranger the same question – please don’t ask me.

And don’t get upset if I don’t want to answer those questions. Or if I come out with a response that is less than pleasing to your curiosity.  Just please think about it.  And if I look tired, or frazzled, or I have 2 toddlers having a meltdown in the supermarket – it’s probably not the best time to come up and start talking to me ;).

One Reply to “The one where I go a bit ranty …”

If you've enjoyed my writing...

You can find more of my work on my professional website here.

Make a donation to the charity that means everything in the world to me, The TAPS Support Foundation. We're making a difference by raising money for TAPS Research and connecting families.
Donate Here.